Posted on May 15, 2016 Posted By: Motherless Daughters MinistryCategories: Loss 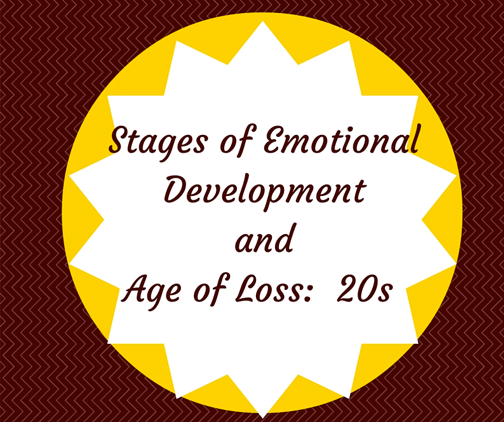 “I felt like a ship set adrift, lost, without a way to steer and I could not see land.”

This is a common theme with women who experience mother loss in their 20’s. Women who experience mother loss at this age are often the most overlooked and misunderstood daughters. Society views these women as adults, but we have to remember that most of them are really still trying to figure out who they are. Many times they are starting on careers, finishing college, and just getting started in the adult world. When this is interrupted by the loss of a mother, their ship gets “mayday calls” and can be capsized by the waves of grief washing over them.

While it is important to separate and create their own identity, they still need a secure base to separate successfully. Being able to just touch home base with the nurturing support of a mother is critical. The 20’s woman may not stay long at home base; she may just need to touch it and continue on her journey. This slight touch gives her the courage to continue. In the 20’s, mother loss can set the ship adrift and it just rides the waves of grief. There is no home base. Loss takes that away.

The 20’s woman reaction may be to hunker down and hold on for the ride, being tossed and turned. She may become emotionally paralyzed. Her world has turned upside down. Even when there is a brief reprieve, she still cannot see land. It is gone. There is no safe harbor.

Some have had to abandon their hopes and dreams to take care of things that the mother had done before.

Susan was in her last semester of college when she witnessed her mother take her final breath. She had not known how serious her mother’s cancer was. The truth was hidden from her. She returned to college and put on a mask to hide her grief. She finished college but had to put her dreams on hold to help with the family business. This woman today is still searching for her identity and where she fits in the world.”

Another woman struggled with an ill mother as she was growing up, but her worst nightmare happened to her when she was approaching her upcoming marriage. Her mother died two weeks before her wedding. Today, this woman still wrestles with the mixed feelings related to her mother loss.

“My mother died two weeks before my wedding. This was supposed to be the happiest day in my life. No one talked with me about her death. It was just as if she was never part of the planning. I had to decide whether to cry or smile.”

If mother loss comes on the tides of a difficult relationship and separation, guilt for what could have been takes over.  The 20’s woman is left out of a relationship she may see as her fault. As an adult, she often feels a range of emotion from guilt to rage.

“We just started getting along. I was a difficult teenager and now she is gone. I have lost my chance to make amends.  My guilt is huge.”

Another woman commented, “I am so angry. When my mother was diagnosed with ovarian cancer, it was too late. She was stage 4. She did not take care of herself. Wasn’t I worth it? Then I had to take on doing the things she had done and taking care of my siblings.”

“I have so much to know. Who is going to be there to answer my questions? I have an overwhelming fear about who is going to help me figure this out?”

If you have experienced mother loss in your 20’s do you relate to any of these examples? Share your stories. How does this play out in your adult life?